. . . or why hydrolyzed wheat protein is gluten free.

Various types of hydrolyzed proteins are used in cosmetic products. I like to use proteins in a product for a few reasons; they tend to give a very nice skin feel and they coat the skin to improve the barrier function of the skin.  Cosmetic proteins come from a variety of sources including wheat. I’ve had some customers show concern about wheat protein because they keep a gluten free diet. But the process of hydrolysis renders that wheat protein gluten free. 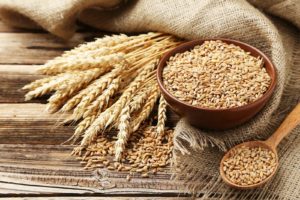 Hydrolysis refers to the splitting of a chemical bond using water. We’ll talk about this in particular with proteins. The diagram below shows water (H20) entering the chemical reaction to split off R2. This is a general hydrolysis reaction.

Hydrolysis is a naturally occurring chemical reaction that occurs in biochemistry. It is often used by the body to break down large macromolecules into their corresponding monomers. For instance, it breaks a protein down into smaller peptides by breaking the chemical bonds between amino acids.

Proteins have complex, three dimensional structures that are necessary for their function. Proteins are first made as amino acid strings. This sequence of amino acids is referred to as their primary structure. The string of amino acids can then take on a shape of its own by bending and twisting, sometimes into helices or pleated sheets.  This is referred to as their secondary structure. After this, the secondary structure can fold back on itself to create a tertiary structure. By doing so, areas of the primary structure that are normally do not lay close to each other on the amino acid sequence can now become close to each other. These areas can form the active sites of proteins or domains, that are necessary for the function of that particular protein (and sometimes it’s allergen potential). These shapes are stabilized by disulfide bonds and hydrogen bonding. Even more complex, is the quaternary structure of a protein which involves different proteins coming together to form a larger protein consisting of different protein chains. 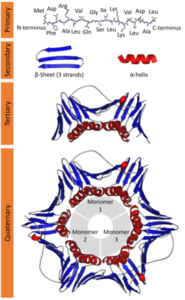 Gluten is a storage protein found in endosperm cells of the developing grain, particularly wheat. It is important to form the elastic network when flour is mixed with water to form dough.

Gluten is actually a family of hundreds of distinct proteins but is primarily made up of two different classes of proteins; gliadins and glutenins. Gliadins are mainly monomeric proteins with molecular weights (MWs) around 28,000-55,000. They are by their different primary structures.The glutenins .are more complex, larger proteins made of multiple peptide chains. Both protein groups have complex structures that are stabilized by hydrogen bonds and disulphide bonds.

Hydrolyzing proteins is a way destroying allergens and it’s common to find instant formulas for babies that contain hydrolyzed cow protein to reduce risk of milk protein intolerance or dog food that contains hydrolyzed protein to decrease allergies and label a product as ‘hypoallergenic’.

It has also been shown that patients with celiac disease are able to ingest hydrolyzed wheat protein and not suffer side effects of ingesting gluten.

Because of this I can tell my customers who have wheat allergies that they do not have to worry about a lotion that contains hydrolyzed wheat protein. Because the protein is hydrolyzed, the structure is impaired such that the active sites are no longer present rendering the proteins not gluten any more.