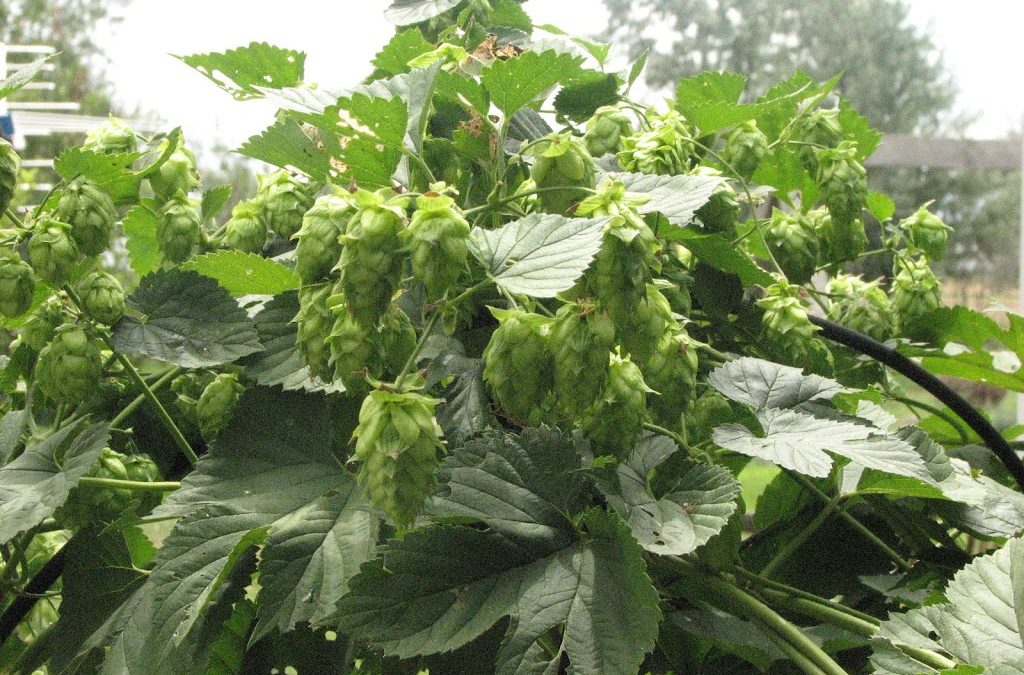 If you like beer you may be interested in growing some of your own ingredients. Hops are the most common herb used in beer and are used for  bittering. They are relatively easy to grow and make a nice vine to grow up your deck or elsewhere.

Hops are my favorite as I am a fan of great IPA’s. They not only bitter the beer it but to create a variety of unique flavor profiles that include floral, piney and citrus. There are some beers that taste very similar to grapefruit juice just becasue of the hops they use. If you are not a beer drinker you may not realize that there are actually many different varieties of hops all producing different aromas and flavors in a beer because of their alpha and beta acids.

We grow hops here on the farm and use them in dream pillows as they are a good for destress and to promote sleep. You may have experienced relaxation after you’ve had a few beers! Hops are also good for skin care and help decrease irritation and promote hydration. I’ve written about the benefits of hops before, here.

There are additional herbs that are used in beer for bittering, flavoring and giving the beer a nice aroma.

Herbs used for bittering include yarrow, horehound, sage, dandelion, costmary, and clary sage. They are typically added at the beginning of the boil phase and need to be balanced with hops which are also bitter.

Flavoring herbs include rosemary, hyssop, borage, oregano, mint, bee balm/monarda, lemon balm, sweet woodruff, marjoram and thyme. Add these carefully as they can have rather strong flavors. They can be added at the beginning or near the end of the boil.

Other herbs can be added for aroma including rosemary, hyssop, lavender, chamomile, lemon balm, bee balm, elder flowers. If adding them for aroma they are added toward the end of the boil.

Yarrow apparently was commonly used to bitter beer before hops were used, a beer known now as Gruit Ale. I don’t know if any commercial brewers use this but I did find a lot of interest in it on several beer brewing websites.

Other herbs that I grow that are used in beers are Horehound, Coriander, Summer savory, Nasturtium, Raspberry Fruit, Rhubarb, Rose Hips and Valerian leaf. Not mentioned in the book, but herbs I think would be great in beer include rose petals, red clover, violets, calendula, salad burnett, and feverfew.

I’d love to taste a good hoppy IPA that is flavored with lavender. I’ve seen several Saison styles with lavender but never an IPA. So, local breweries, make my dream come true please!

Besides using these herbs in beer, they can be used for skin care and bath herbs. Beer Spa is a concept that is gaining in popularity and many of these herbs can be used in conjunction with beer to provide skin benefits. We just put on a beer spa event and hope to do more in our area.