Belladonna – part of a cosmetics history 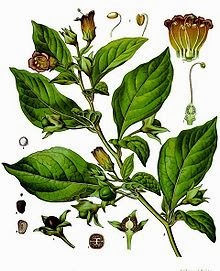 The term belladonna means “beautiful woman” in Italian. It is also the name of a plant, Atropa belladonna also known as deadly nightshade. It produces several toxic alkaloids such as scopolamine, hyoscyamine, and atropine. Atropine, isolated from this plant, is used as a drug to increase heart rate during resusitation, to inhibit salivary gland secretions and to treat organophosphate poisoning (insecticides and nerve gas).

Atropine is an alkaloid compound that is naturally occurring in the nightshade family of plants such as jimson weed. Its physiological action is to inhibit the acetylcholine receptor.  Its antidote is another natural plant compound known as physostigmine or the organophosphorus insecticides known as parathion. Both of these are acetylcholinesterase inhibitors which increase concentration of acetylcholine in the synapse causing muscle contraction.

Acetylcholine is a neurotransmitter the body uses in the parasympathetic nervous system as well as at the neuromuscular junction. Inhibiting it means that muscle contraction does not occur, or muscle relaxation will be promoted. When muscle relaxation happens in the eye, it results in dilation of the pupils. At one time it was popular for drops to be prepared from the belladonna to use in the eyes to cause pupil dilation. This was thought to be attractive. Because it can cause flushing, extracts were applied topically to the cheeks as blush to give a rosey color.

Although in the right hands it can be considered medicinal, it is generally considered a toxin to both humans and animals causing death by disrupting both breathing and heart rate. There is suspicion that the wife of Emperor Augustus of the Roman Empire used it to kill him in 14 AD. Belladonna and related extracts have also been used as poison-tipped arrows! Beauty has an interesting history (as well as presence).