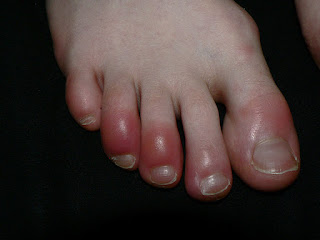 Even though inflammation is a normal and helpful process that the body uses to protect itself, long term inflammation can lead to serious disease of aging. Inflammation is a localized response of the body that is triggered by microbial invasion or tissue damage. It is a normal response that the body uses to protect itself and keep infection local rather than systemic. However, recently there is building evidence indicating that it has a big role in the aging process.
The four key characteristics of inflammation are redness, pain, heat and swelling. Although it is not something we enjoy the body uses inflammation to prevent a potential infection from spreading to other parts of the body. Inflammation is localized which means it occurs in the tissues and not in the blood. It involves chemical messengers of the body called cytokines that are released by the immune system. Many cytokines are involved in growth and regulation of immune cells. Some of these cytokines include tumor necrosis factor- α and interleukin-6.
The typical inflammatory response is acute (rapid and short onset) and meant to protect the body from microbial pathogens and promote tissue repair to return to normal (homeostasis). However, it is chronic long term inflammation that is tied to the aging process and may even be linked to diseases such as atherosclerosis, dementia and cancer as well as skin damage and wrinkles.
The stages of inflammation are vasodilation, phagocytosis, chemotaxis and tissue repair. Vasodilation refers to an increase in the diameter of the blood vessels and an increase in their  permeability. Increased permeability allows the blood proteins and whit blood cells to leak out of the blood and into the inflamed tissue. It is this response that begins the symptoms of heat, redness and swelling. Because there is now more heat, metabolism is increased. This response is caused primarily by histamine, a protein released from basophils in the local area that is damaged.
Phagocytosis is a wonderful word that means ‘cell eating’.  Cells that are transformed into phagocytes actually engulf particles including bacteria, cellular debris and foreign articles that enter the tissue. Enzymes in the phagocyte then dissolve this debris. This is a way of cleaning up an area.
Chemotaxis refers to the movement or migration of cells, typically phagocytes, towards the area of inflammation. This occurs because of attractive factors secreted by bacteria and injured tissues. These white blood cells squeeze their way through the capillaries into the tissues through an ameboid like movement called diapedisis. Here is a picture of diapedesis http://medical-dictionary.thefreedictionary.com/diapedesis

The fourth and final stage of inflammation is tissue repair. Once the danger of infection is over, cell division takes place to repair damaged tissue. This is done locally through the secretion of growth factors. Providing these steps occur successfully, the process if ended. If inflammation is not successful in preventing spread of bacteria, the immune system will then be activated.