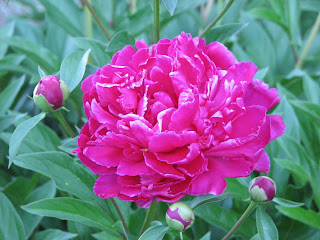 In Catholic tradition the month of May is dedicated to Mary and she is called Queen of May. Devotion to Mary the Mother of God is a long honored tradition and in May is recognized by ceremonies where crown is put on the statue of Mary and various flowers are also given to her. Some people take devotion to Mary one step farther and dedicate a garden to her.
Mary’s gardens used to be quite popular and now they are tending to make a comeback. Christianity is rich in using symbols to enhance spiritual life, and honoring Mary by reflecting on flowers named after her and the legends associated with these flowers are one example. In Christianity, Mary, the Mother of God is also refered to as Immaculate Mary, the Virgin Mary, Mother Mary, blessed Virgin, Our Lady and more. Her attributes include being a strong woman with wisdom, faith, vision and holiness. She was a spiritual leader to Jeasus and a source of inspiration.
I’ve chosen a few of the plants and legends here.
The rose is probably the flower most strongly associated with Mary. Catholics believe that Mary was assumed into heaven without suffering death. It is said that  when she was assumed, lilies and roses were found in her tomb. Catholic prayer beads on which ‘Hail Mary’s’ are prayed, are called a Rosary and at one time were actually made from rose petals. Rose gardens are often places of meditation and honor to Mary. These rose gardens were also called rosaries in the middle ages.
Violet
It is said that when the angel Gabriel spoke to Mary of God’s plan for her that violets blossomed outside her window when she accepted God’s plan. And that the angel Gabriel blessed the flowers endowing them with their fragrance. Violets are associated with Mary because they have long been a symbol of humility and simplicity. They have a modest way in which the flowers nestle among the leaves and grow low to the ground. It is said that the violet dropped its head in the shadow of the crucifix.
Our Lady’s Bedstraw (Galium verum) and Thyme (Thymus vulgaris)
These are both said to be some of  the sweet smelling herbs that made both Jesus’ and Mary’s bed in the stable in Bethlehem and when Jesus was laid in the manger after his birth the flowers began to bloom.
Blessed Thistle, Our Lady’s Thistle (Silyum marianum and others)
The blessed thistle is recognized by the white veins on the leaves which were said to be formed from drops of milk from Mary’s breast.
Rosemary, St. Mary’s Tree (Rosemarinus officinalis)
When the Holy Family fled from Herod into Egypt, rosemary was one of the bushes that gave shelter to them. It is said tht when Mary hung her cape on the rosemary bush it’s flowers turned from white to blue and became forever green and aromatic.
A Mary’s Garden often recalls the life or physical attributes of Mary. For instance a booklet from one Mary’s Garden reads: “Picture her eyes (Forget-Me-Nots), her hair (Maidenhair Fem), her five fingers (Potentilla). Think about her apparel: her smock (Morning Glory), her veil (Baby’s Breath), her nightcap (Canterbury Bells), her gloves (Foxglove), and her shoes (Columbine). Remember her attributes: Mary’s humility (Violet), the fruitful virgin (Strawberry), Mary’s queenship (Virgin Lily), Mary’s Flower of God (English Daisy), Mary’s glory (Saint John’s Wort), and Our Lady’s Faith (Veronica).
Think about her life: The Bethlehem Star (Bellflower), the Christmas Flower (Poinsettia), Lady’s Bedstraw (Dianthus – Mary used bedstraw to prepare a bed for Jesus), the Epiphany flower (Chrysanthemum), the Flight into Egypt (Fig Tree – legend says that the Holy Family ate the fruit of this tree during their flight into Egypt), Our Lady’s Tears (Lily of the Valley – tiny white nodding bell-shaped flowers can be likened to a train of tears), Our Lady’s Tresses (Asparagus Fern – legend holds that at the foot of the cross, Mary, in. deep agony, tore out a tress of her hair which Saint John preserved), Mary’s Bitter Sorrow (Dandelion), and the Assumption (Hosta – Plantation Lily blooms at the time of the Feast of the Assumption).”
Here are some common names of flowers and their medieval name and religious meaning
Carnation – Mary’s Love of God. They were said to bloom at the birth of Jesus.
Calendula officinalis – Mary’s Gold
Rose – Mary is often called “The Mystical Rose”