Getting areas ready to plant means taking out some things. both Dandelion and Dock are prolific on my farm and I try to control them by digging the roots and using them.

Yellow Dock is a weed found in many pastures. It is also known as curly dock because the leaves have undulating egdes. It is edible and sometimes eaten as a potherb but it is the deep taproots that have medicinal properties. Its main use is as a laxative due to the anthraquinones found in it such as emodin and chrysophanol. But has also been used to improve the absorption of minerals and the help a headache.
Yellow dock is a purifying tonic and so can be used topically for a number of skin conditions. It has anti-inflammatory and anti-itch properties. Although it is most widely used for acne it has also been used for eczema, psoriasis, rash, boils, and abscesses and to calm irritated skin. It is said to improve blood flow (a good thing for most conditions). Because of tyrosinase inhibitors dock could potentially decrease age spots on the skin.
Dandelion (Taraxacum officinale) 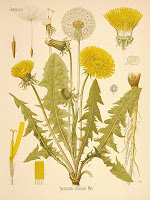 The word Dandelion means ‘lions tooth’ referring to the jagged edges on the leaf. There are many similarities between dock and dandelion in that they are both detoxifiers and great for skin care including acne. Dandelion is also a pot herb (cooked) and the raw leaf can be used as a salad green. The flower is used to make wine and fritters and we’ve made coffee substitute from the roots before. The herb is very nutritious and a source of vitamins A, B, C, and D, as well as minerals such as iron, potassium, and zinc.
Dandelion is both a laxative and a diuretic (increasing urination to decrease water content of the body and thus decrease blood pressure). It has been used to detoxify the liver and gallbladder and to help decrease a headache.  In skin care it has been used to treat acne, eczema and psoriasis. It is antiinflammatory and an antioxidant. It has an effect on the cells of the dermis to strengthen that layer of skin. Many herbalists recommend it for breast health and medical science is looking at the possibility of dandelion to inhibit cancer cell growth.
Don’t plant dandelion or dock though; come to my place and dig them up if you need some; both spread wildly!