What is a Surfactant? 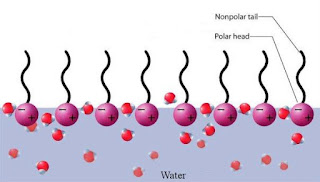 Surfactants are used in many cosmetics as foaming agents, cleansers, emulsifiers, conditioners and solubilizers or dispersants. The word surfactant comes ‘surface active agent’.  They are ingredients that lower the surface tension of a liquid, or another way to put it is that they are ‘wetting agents’.

A single surfactant molecule has two ends; one that is attracted to water (hydrophilic) and one that is attracted to oil (hydrophobic). This property of having both water soluble and oil soluble parts is called amphiphilic (which in my opinion is a very fun word to say). Each end of the molecule can associate with a different environment and bridging them hence solubilizing one in the other enabling dirt and oil molecules to loosen and dissolve in the water.

Soaps are common surfactants but are seldom used in cleansers and shampoos because of their residue. The most common non soap surfactants remain sodium lauryl sulfate and sodium laureth sulfate which are both very effective cleansers but some people fine them irritating.

Many modern surfactants are made from oleochemicals (vegetable derived) rather than petrochemicals (petroleum derived) and are also biodegradable. Oleochemicals, or fats used to synthesize these surfactants include palm and coconut oils. These surfactants include the anionic alkyl polyglucosides (decyl, lauryl, and octyl), which are made from fatty alcohols from coconut or palm and glucose from corn starch using green chemistry. Their names vary depending upon the length of the carbon chain.

The lactylates (sodium lauroyl and sodium stearoyl) are food grade emulsifiers made from coconut oil and milk sugar. They are great moisturizers and provide extended fragrance release.
Other natural surfactants include lauryl glucose carboxylate which provides added foaming ability.  Glutamate surfactants such as disodium cocoyl glutamate, sodium cocoyl glutamate are mild and made from amino acids. They provide fine lather, good cleansing and are rapidly biodegradable. Vegetable proteins can also be a basis for surfactants such as potassium undecylenoyl hydrolysed soy protein and sodium lauroyl oat amino acids.

Anyone who has taken a physiology class has heard of surfactants that naturally occur in the lungs. Here they prevent the the lungs from collapsing on themselves due to the surface tension of the moisture in them. The alveolar cells of the lungs secrete a lipoprotein that acts as a surfactant.  Because the alveoli (air sacs) of the lungs are coated in moisture the surface tension there encourages collapsing of the alveoli. If the alveoli collapsed, air would not be able to enter. It is the surfactant that allows the alveoli to remain open. Interestingly, during fetal development surfactant production begins rather late. Babies born prematurely before 28 weeks suffer infant respiratory distress syndrome (IRDS) because their lungs cannot stay open and hold air. Follow this link for more information on surfactants.
http://www.scienceinthebox.com/en_UK/glossary/surfactants_en.html http://www.scienceinthebox.com/en_UK/glossary/surfactants_en.html