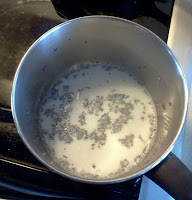 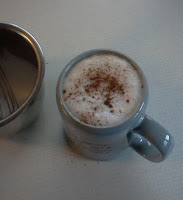 heard talk recently of lavender coffee and even heard there’s a coffee shop nearby that makes a lavender mocha, although I’ve not been there yet. So I wanted to give lavender coffee a try. Since I always have milk in my coffee I went about making my lavender coffee by first infusing milk. I put about a cup of milk in a pan with about a teaspoon of lavender buds and heated that briefly while I made a cup of coffee. For the coffee I used an espresso roast which is my favorite; I made this one extra strong to allow for a good amount of milk. When the coffee was finished I strained the lavender buds from the milk and whisked it a little to froth. I poured the milk into the coffee and added a small amount of cinnamon to the top. Because lavender has a very astringent taste I am always careful not to use too much in a recipe. This came out quite delicious though without the astringency common to lavender. I could easily have used more but it was good with this amount.

Later I will infuse lavender in milk to make some hot chocolate. I know that will be good!
If you are interested in using lavender in drinks here are some other ideas you may have heard of:
Lavender Lemonade
Lavender Earl Grey Tea
Lavender Martini (don’t infuse this too long as it will get bitter)
Lavender also goes well with many fruit drinks including peach and raspberry.
I’ve never had a lavender pale ale  but I think the flavor of lavender would add a nice floral touch to some good hops. I’d love to try on.
Do you have a favorite lavender drink?