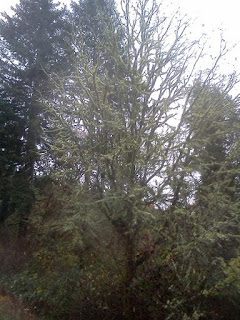 Would you liken to an algae and a fungus? Yes, nerd jokes never grow old. But a lichen is a symbiosis between a fungus and an algae. Lichen grow under conditions where neither the algae or the fungus alone could grow, but together they rely on each other and grow fine. In Colorado we find lichens growing on rocks and rarely find these web-like structures growing in trees. However, in Oregon (where I happen to be at the moment celebrating Thanksgiving) there are many of these hanging clusters on branches which are called Old Man’s Beard or more properly ‘Usnea’.

Usnea is best known as an immune tonic and anti microbial which is particularly good for lung diseases. It is best used as an alcohol extract or tincture. Many of these properties are due to the content of usnic acid found in this symbiotic organism. Although usnea has been shown to increase bleeding times it can still be used as a wound dressing in an emergency. Its web-like structure makes it useful to help hold a wound together in an emergency and prevent infection.