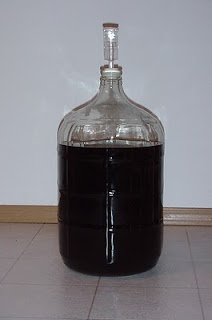 Beer is an ancient drink (and food) that I happen to be quite fond of. I especially like beer with lots of floral hops. Hops were not always used in beer though, and may not have been used until the 9th century. Before that, a mixture of herbs referred to as gruit was used to flavor beer. Although I don’t brew beer, I do grow hops and other herbs so am interested in what herbs are used in beer. I recently read “The Homebrewer’s Garden” by Joe and Dennis Fisher to learn more about herbs in brewing, a very interesting book by the way.

Here are some of the herbs from this book that grow in my gardens.

Anise Hyssop – provides a licorice flavor to beer.
Basil – adds a slightly bitter, spicy flavor.
Bee Balm – often used as a tea, bee  balm provides a bitter, minty flavor.
Borage – gives a spicy, cucumber like flavor to beer. This herb can also be steeped in wine.
Chamomile (Roman) – is said to be one of the ‘secret’ herbs in Celis White beer. It gives an apple-like flavoring.
Clary Sage – provides a balsamlike aroma to beer.
Coriander – this is a flavoring in one of my favorite beers; Belgian Whites.
Dandelion – yet another use for this common weed. Use the tender spring leaves in your salad and the larger leaves later in the season to bitter your beer.
Elder – the berries are best know for making wine, but they can also be used to flavor beer. The flowers can be used for ‘dry hopping’ as well.
Oregano – adds a distinctive flavor to beer.

Horehound – this herb can add a warm, menthol flavor. I wonder if horehound beer can be used to control coughs?
Hyssop officinalis – this herb is used in Benedictine and Chartreuse. Using it in beer provides a minty, medicinal scent.
Juniper – commonly used in gin, juniper can contribute this taste to beer as well.
Lavender – oh, the many uses of sweet lavender. I would love to try a pale ale flavored with lavender. Let me know if you know of one.
Lemon Balm – this is used in many liquours and can add a lemon scent/flavor to beer.
Mint – there are many types of  mint, and although I love a mint tea, I don’t know how this would be in beer.
Rhubarb – great in a fruit crisp, this is one fruit that would be interesting in beer.
Rose hips – apparently rose hips are used in some beers from Poland and impart a citrus flavor and red color to beer.
Rosemary – before the use of hops in beer, rosemary was quite popular.
Sage – was used in fifteenth century English beer recipes and adds bitterness and camphorlike scent.
Savory, Summer – provide a peppery, oregano-like flavor and aroma.
Spruce – was popular during the American Revolution spruce adds distinct, woods taste that is popular in winter beers.
Sweet Woodruff – this herb is what makes May wine what it is but can also be used to add a mild, sweet aroma to beer.
Thyme – used to give beer a spicy aroma.
Valerian root – is commonly used as a sedative so what better place to use it than beer?
Yarrow – both the leaves and flowers can be used to bitter beer.

I’d love to see more ‘herbal’ beers so I hope that if you are a brewer this gives you some ideas – and don’t hesitate to share with me! I’d love to write reviews!