Chickens & HR 2359; neither is related to Safe Cosmetics 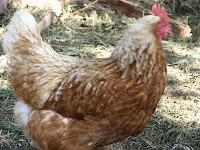 I have found recently that some companies and organizations are coming out saying the support the Safe Cosmetics Act of 2011 but yet still find many faults in the bill. They are apparently assuming that these faults will somehow be ‘worked out’ before or if it passes. My opinion continues to be that this bill is completely unacceptable and unworkable, so I wanted to go through each section of the bill to point out these flaws.

The Campaign for Safe Cosmetics, part of the Environmental Working Group, a non-governmental organization and lobbying group has been working for several years to pass a bill putting huge restrictions on cosmetics. Two years ago they introduced a bill in Colorado which I had the pleasure of testifying against. The sponsor of the Colorado bill, Rep. Diane Primavera decided that is was her personal care products that caused her breast cancer. Despite the fact that there is no medical evidence linking personal care products to breast cancer (or any cancer) she sponsored a bill to regulate these products because in her mind they cause breast cancer. I remind you of this just so you understand (or don’t) the thinking of the people behind these bills.

So lets look at the first section of the Safe cosmetics Act (HR2359), 611, about Definitions.

Anyone who determines the final formulation of a cosmetic is considered a manufacturer, fair enough. The tricky part comes with the definition of ingredient. This includes not just the ingredients you use to make the cosmetic itself (which is how ingredient is defined now) but those that are there because they are incorporated into the cosmetic as an ingredient of another cosmetic ingredient. By this I am assuming they mean solvents that some active ingredients come in. For instance, if you have an extract that is in glycerin or propylene glycol then the name of that solvent must also be listed. No problem with me here.

Processing aids are also ingredients, even if they do not appear in the final product. I’m not sure what they are getting at here but I wish they would clarify this part. One situation that comes to mind is in making soap. Soapmaking involves a chemical reaction between fats and lye (sodium hydroxide) so even though no sodium hydroxide is found in the finished soap it would still have to be on the label. This would indeed frighten many consumers.

Additional situations would be anything used in the actual synthesis of an ingredient. Pulling from my biochemistry background I know that proteins are hydrolyzed using strong acids such as Hydrochloric acid and then neutralized with Sodium Hydroxide. Alternatively pancreatic protease might be used. Amino acids such as glutamate are released during this process. So instead of ‘Hydrolyzed Wheat Protein’ on a label it might read, “wheat protein, pancreatic protease, hydrochloric acid, sodium hydroxide, peptides, alanine, arginine, asparagine, aspartic acid, cystein, glutamic acid, glutamine, glycine, histidine, isoleucine, leucine, lysine, methionine, phenylalanine, proline, serine, threonine, tryptophan, tyrosine, valine”. The last 20 being the amino acids that might be released as the protein is hydrolyzed. Does that labeling make your cosmetics safer?

Substances that are present by reason of having been added to a cosmetic during processing for their technical or functional effect are ingredients. Again, I wish they would clarify.

Any individual component of a petroleum-derived, animal-derived, or other ingredient that the Secretary deems an ingredient for purposes of this chapter must also be listed as ingredients. Again, this is like the previous bill where each component of an oil would need to be listed making ingredient lists unreadable. I don’t use animal oils in my products but I do use beeswax which according to Wikipedia is: palmitate, palmitoleate, hydroxypalmitate, oleate esters of long chain aliphatic alcohols, triacontanyl palmitate, cerotic acid and more. And of course this does not include any contaminants that might be in the beeswax. Keep in mind that you will need to test your beeswax for any contaminants that might be there because the next section deals with contaminants.

The term ‘ingredient’ also includes contaminants that are present above technically feasible detection levels which means 1 part per billion (or one microgram per liter)! And not only contaminants that might be in your ingredients such as lead, microbes, arsenic, and a variety of contaminants from soil and water, but also contaminants from a container that may appear over the shelf life of the product! So do we also have to do testing a year after manufacturing?

The bill defines a microbusiness as one that sells less than 2 million dollars per year. This includes most people I know but there are issues with this later.

The definition of Reasonable Certainty of No Harm – means that no harm will be caused to anyone! It includes not only the general population but vulnerable populations, low dose exposure, additive effects over time and cumulative exposure from all sources – including environmental! Now we certainly all formulate so that the general population will not be harmed but we cannot guarantee no harm to any vulnerable population. There are people with immune deficiencies, allergies, sensitivities etc.

Fixes
The language here is just too broad. What does the Campaign for Safe Cosmetics Really want?? I know that they have been concerned about lead in lipstick and the dangers associated with 1, 4, dioxane as a byproduct of ethoxylation. Since lead is a naturally occurring contaminant of red pigments used in lipstick how about requiring lead testing of mined red pigments? And then letting EPA determine an allowable safe level for lead. If the amount of lead tested for is higher than that, I don’t want it listed on the label, I want it not used! Just ban lead at a given level in red pigments don’t make everybody pay the testing prices for ingredients that are not likely to contain lead! Lets have manufacturers of ethoxylated (peggylated) ingredients test for 1, 4, dioxane. I believe these manufacturing procedures are such that there is little to no contamination now, but it might be a good thing to be sure of. Let the EPA determine a safe level and if manufacturers find a level higher than that in these ingredients, forget about putting it on the label, get rid of it! I don’t want it. But everybody should not have to test for 1, 4, dioxane when that contaminant is not going to be there. Every grower of herbs should not have to test their herb extracts for whatever list of contaminants the Campaign for Safe Cosmetics (or I mean the ‘Secretary’) deems important.

I also wonder if the supporters of this bill such as Badger Balm think that by backing the bill they become exempt from listing ingredients in this way or testing for parts per billion of contaminants in their products. How much would this cost and how much would it increase the price of a tube of lip balm. I’m sure Badger Balm sells more lip balms than I do, so while my lip balm price might have to increase by $200 a tube, there’s may only have to increase by $50 a tube. But still, are Badger Balm customers willing to pay that price to insure that their lip balm does not contain 1 ppb of lead or arsenic even though there is more than that in the food they eat?

Here is where you can sign a petition against SCA http://www.thepetitionsite.com/1/no-2-sca-2011/