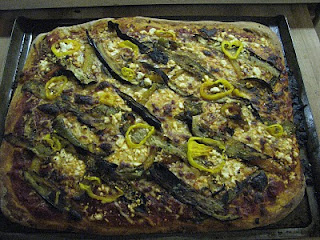 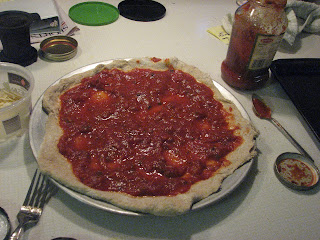 Homemade pizza is probably my favorite thing to make for dinner. There are so many variations of toppings for pizza and its a pretty quick meal to make. The dough needs to rise awhile but you can be wrapping presents while it rises. Making pizza is a good way to get the whole family involved too and we often make several for different tastes.
The toppings here are roasted eggplant, sweet peppers and feta cheese. To do this, slice the eggplant about 1/4 inch thick, sprinkle with a little salt and let set for at least 15 minutes to ‘sweat’. After 15-20 minutes you will see liquid bubbled up on the eggplant; blot this off with a paper towel, put eggplant on an oiled baking sheet and cook at 375 for about 15 minutes or until soft. Be careful not to overcook and char the eggplant. The peppers get roasted in the oven at the same time. Roast these a little longer until the skin chars a little. Remove from oven and let cool enough to peel the skin off the peppers. Slice both the eggplant and the peppers and top your pizza with them followed by some feta cheese. I put some banana pepper rings on this pizza too.

Mix the water and yeast together, then add the rest and mix. Let rise in a warm place for 1 hour or so (times are only a guideline). Knead, split in two (or more) and roll dough out on a floured surface to the size/shape pizza you want.