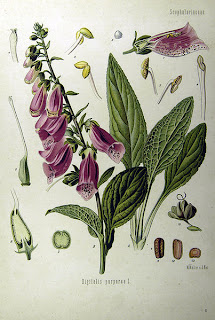 Digitalis is a common drug used today to treat congestive heart disease; a condition in which the heart does not pump out the entire volume it should be pumping. These drugs were first isolated from the foxglove flower, Digitalis purpura. Dr. William Withering is given credit for discovering the use of this herb in treating congestive heart disease, called ‘dropsy’ at the time. However, it was his observation that a local herbalist was successfully treating dropsy patients that piqued his interest and he learned that she was treating them with the digitalis plant. This prompted him to begin studying her patients as well as treating his own patients this way. His data was collected and published as “An Account of the Foxglove and some of its Medical Uses With Practical Remarks on Dropsy and Other Diseases” in 1785. Because the therapeutic window for this herb was so narrow foxglove is difficult to use and has high toxicity. These cardiac glycosides have been purified and are now used as a drug, digoxin, which also has to be monitored carefully. Digitalis (and digoxin) inhibits the sodium-potassium ATPase which leads indirectly to increased intracellular calcium. Increased calcium increases strength of contraction.