Rue: Do you know this herb? 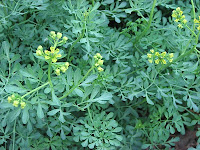 I’d forgotten how nice and spicy Rue (Ruta graveolens) smells when rubbed, although some plant descriptions describe this as a negative smell. I have this plant in my front garden by the door. It just started blooming but its blooms are rather humble compared to my peony plant that has a place next to Rue. Its a very strong herb that is toxic in large amounts so I’ve yet to find a good use for it, but I do love the way it looks and stays somewhat green during the winter. It is said to be good for some neuological pain, headache, arthritis and as an insect repellent. Scientists from UC Davis are looking at compounds in rue to make drugs for rheumatoid arthritis and type 1 diabetes.

There are some recipes for Four Thieves vinegar (said to be effective against the plague) that include Rue although modern recipes rarely have Rue. It is also edible and used to spice cheeses at one time, though again, is rarely used today. It can have an irritating effect on skin and so not used there. Yet I keep it in my garden and enjoy it none the less.