Some of us are quite dependent on our morning caffeine usually in the form of coffee or tea. Caffeine is in a chemical class called alkaloids which was first defined as a natural substance that reacts like a base, or alkali. Although they don’t have a strict definition, most alkaloids are derived from amino acids and because of that they contain a nitrogen group. They are typically described as having a bitter taste that is tasted more at the back of the tongue. Having their atoms arranged in a ring structure as seen in these structural diagrams is also typical. Notice the 4 nitrogens (N) in both xanthine and caffeine.

Caffeine is more descriptively a xanthine as is theophylline (found in tea) and theobromine (found in cocoa). 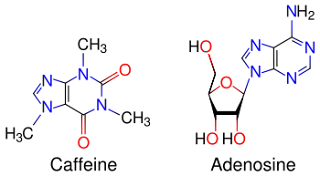 Caffeine stimulates the central nervous system which results in increased alertness and thought formation. Other sources of caffeine include yerba mate and guarana plants which are sometimes used for weight loss and increased energy as well as cocoa. Caffeine can also act as an antioxidant, protecting the body from free radical damage.

In addition, caffeine appears to have some anti-inflammatory and vasoconstriction effects which has brought it to the attention of those interested in skin care. It has recently been found in many anti-cellulite products. Some short term studies have shown a positive effect with topical use of caffeine, but no long term improvements have been documented. Caffeine is metabolized in the liver to paraxanthine which has an effect on fat to break it down. Green tea w caffeine has been found to inhibit formation of skin tumors in mice. Tea and coffee both make good additions to skin care in my opinion because they are high in antioxidants. Ground coffee is great in soap and can help remove other less desirable smells (fish?).

Caffeine is similar in structure to another naturally occurring alkaloid in the body, adenosine. Adenosine acts in the body to help promote sleep. Now caffeine is not similar enough in shape to act the same way as adenosine, but rather it blocks adenosine from acting. This blocks the promotion of sleep – or wakes us up! Caffeine can also increase levels of the ‘pleasure inducing’ neurotransmitters dopamine and serotonin making us ‘feel good’. This may be one reason many people enjoy a caffeine drink after dinner. Of course caffeine can be overused and lead to heart rhythm disorders, anxiety, insomnia and mood changes. Withdrawal can cause headache and irritability. So enjoy your caffeine in small amounts.

Just an fyi; There was recently a bill proposed in Colorado by the Campaign for Safe Cosmetics and the Colorado Women’s Lobby that would have banned the use of coffee in skin care products because it is a possible carcinogen according to the International Agency for Research on Cancer list 2B. This bill was turned down thankfully as it would have banned a number of other natural ingredients used in cosmetics. Care needs to be taken when organizations who propose to be protecting us get carried away. So for now you can continue to use coffee in your scrubs and soaps, but be vigilant as to what legislation may be around the corner.