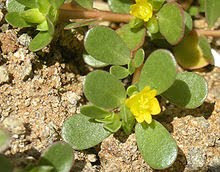 There has been some talk lately about environmental estrogens and for good reason. The National Toxicology Program has some concern that these endocrine disruptors may cause problems with human development and reproduction. Endocrine disrupters act like hormones to interfere with normal function of body hormones such as estrogen. These xenoestrogens can be byproducts of industrial, agricultural and chemical companies and can act as estrogens in both humans and wildlife causing potential ecological and human health impact.
One of these endocrine disruptors is Bisphenol A or BPA which is produced in the production of polycarbonate plastics and epoxy resins. It can be found in foods and beverages because of leaching from packaging. Plastics made from BPA typically have a #7 on the bottom as their recycling code.

http://www.niehs.nih.gov/news/media/questions/sya-bpa.cfm
An interesting study recently has found that the common garden weed, purslane, may have a very practical use in removing BPA from landfill leachates and industrial wastewater, a process known as bioremediation.
In this study, Japanese scientists from Osaka University incubated bacteria free cultures of Portulaca oleracea (purslane) with the endocrine disruptor, bisphenol A (BPA). The concentration of BPA used was one that is frequently detected in landfill leachates (50 micromolar).
BPA levels in the water began decreasing almost immediately after incubation with P. oleracea with more that 90% of the BPA removed from the water within a 24 hour period. Controls were used to verify that BPA removal did not occur without the presence of the plant. In addition to looking for the actual presence of the BPA chemical, activity measurements confirmed that BPA was indeed removed from the water.
Scientists confirmed that the plant was not simply absorbing the BPA and accumulating it in its own tissue and speculated that the plant was metabolizing BPA into a compound that does not have endocrine-disrupting activity.
Besides BPA, scientists also found that P. oleracea was able to remove several other previously identified endocrine disruptors as well. Although over 100 typical garden plants were used in this study, P. oleracea was the most successful.
As if this weren’t enough, purslane is an edible weed that is very high in omega 3 fatty acids. In many parts of the world it is eaten as a vegetable. It should be coming up in many areas now as spring approaches. Look for it in your yard and consider tossing some in a salad – of course make sure it is grown in a clean place.