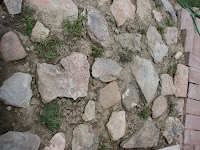 Over the past year we have dug into the raised bed against the back of the house to put in a hot tub and a deck. This left a large area of weeds – one of those “I’ll get to it someday” areas. Well, my brother and his family visited us last week and my hard working sister in law wanted a project we could do together. Now when someone makes an offer like that I am smart enough not to suggest scrapbooking or going through old photos. Yes, I suggested moving heavy rocks around which worked well since she is younger than I.

First we (or rather she) pulled out all the weeds and moved some rock out of the area. We then put in the cut flagstone path that goes up to the water faucet on the back of the house. We already had the flagstone as well as the other flatter “moss” rock (its really lichen, not moss) from taking down a water fall by the garden pond that we had filled in earlier. We laid the various flatter stones into the ground leaving spaces for plants between them. This is an area I do not want to think about watering so that was taken into account when selecting plants. I also only wanted low growing plants.
Seve 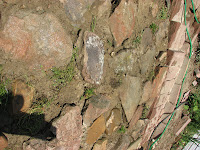 ral types of sedum were transplanted from other areas in the yard. A trip to the neighbors yielded some violas and garlic chives. Then from the garden center I bought creeping thyme and Roman chamomile.

Some sand was used to fill in the spaces in the walk to keep the flagstone from shifting too much. Since this area is close to the faucet we put a stand to hold the hoses in the front. 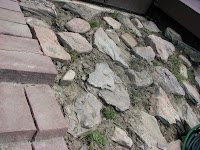 I’m hoping these plants set down good roots and not too many weeds grow. It rained heavily after we finished and I’ll make sure the new plants get a good amount of water for the next few weeks. I have a few other flat rocks laying around that I can use to fill in more of the spaces too.

Well, you’d think this would be enough for one person to do, but she insisted on weeding some of my other beds too. Thanks Angela, it was great to see you (and Kelly, Kyle, Emi)! 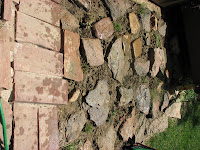