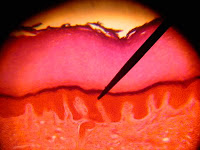 I just came across this alarming news; 4 separate lotions were tested in mice and found to increase the occurrence and growth of skin cancer following exposure to UV light. The moisturizers used and their ingredients (as well as I could find) are:

Dermovan is a wholesale product used as a base or vehicle for other ingredients by compounding pharmacists. It apparently has not been available since 2006 but contains water, glyceryl stearate and stearamidoethyl diethylamine, glycerin, mineral oil, cetyl esters, cetyl alcohol, butylparaben, methylparaben, and propylparaben.

All four creams are emollients that are recommended by dermatologists for dry, rough, scaly and itchy skins.

The initial purpose of this study was to investigate if caffeine added to a skin cream could inhibit the formation of cancer after UV exposure. Preliminary evidence has found that this is true. These four creams were chosen as the bases to add caffeine to and were undergoing testing to confirm that they were suitable as negative controls. The research however suggested they were not negative controls but actually increased the growth of two types of non-melanoma skin cancer in mice. Dermovan had the highest results.

Because of these results the researchers asked Johnson & Johnson to make a custom blend to test. The ingredients of this blend were: purified water, propylene glycol, stearyl alcohol, cetyl alcohol, polysorbate 20, isopropyl myristate, C12-15 alkyl benzoate, benzoic acid, glycerin, and sodium hydroxide. Although this cream did not show evidence of increasing skin cancer in mice more human research on this and other moisturizers will certainly be required.

It is difficult to pinpoint a possible ingredient in these creams that may be at the root of promoting skin cancer. Looking at the ingredients list however one can see that petrolatum (mineral oil) is found in the creams contributing to skin cancer but not in the custom blend that tested negative. According to the National Toxicology Program, mineral oil is related to skin cancer in mice at least.
Sodium lauryl sulphate found in at least one of the creams is considered an irritant by some. There are several other ingredients found in these products that would never find their way into creams and lotions made by Sagescript Institute. Possibly ingredients that are not tumorigenic by themselves can act synergistically with UV light to be more tumorigenic. It is of course too early to relate these results to humans though but you can be sure that more testing will be done in this area. In the meantime keep in mind that certain herbs have been found to decrease skin damage caused by UV light including green and black tea, rosemary and raspberry seed oil.